“A society grows great when old people plant trees whose shade they know they shall never sit in.”    -Greek proverb

“A hundred times everyday I tell myself that my inner and outer life are based on the labors of other men, living and dead, and that I must exert myself in order to give in the same measure as I have received.”   -Albert Einstein

I am reading a book called, “All That We Are”, by Jay Walljasper. The second part of the title is “a field guide to the commons”.

Wikipedia defines the term “the commons” as shown below in italics: (http://en.wikipedia.org/wiki/The_commons) 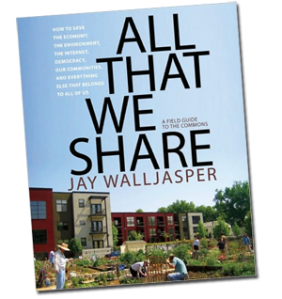 The commons is terminology referring to resources that are collectively owned or shared between or among populations. These resources are said to be “held in common” and can include everything from natural resources and common land to software. The commons contains public property and private property, over which people have certain traditional rights.

When I first picked this book up, I thought it was mostly about common land, but it turns out to be so much more than that as the definition here indicates. The book is loaded with case studies from around the world where people are re-claiming and creating “the commons”, in its various forms.

Exciting stuff! I need to get back to reading, the book is due back to the library Saturday!