On Sunday, my parents were available for a few hours of sight-seeing before they were heading back to Calgary. We decided to drive over to UBC and have a look around MOA, the Museum of Anthropology. My husband and I have talked about this a few times before and were looking forward to the day. After a few short hours, it became apparent that this would take several days to see all the exhibits. We had no idea of the treasure that has been sitting in our backyard all this time.

After looking through the photographs and doing a little more research today, I have a little better understanding of the Haida. Their artwork and totem poles are the larger pieces on display, so upon entering the Museum space it is very awe-inspiring. 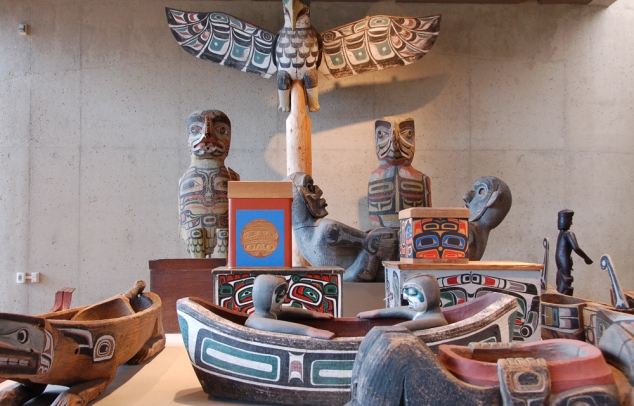 For at least 10,000 years, the Haida people and their ancestors have lived on Haida Gwaii (the Queen Charlotte Islands), an archipelago of 150 islands off the North-Western coast of British Columbia.

Monumental totem poles carved of red cedar are one of the means by which Haida people, today as in the past, honour their ancestors and record their histories, territories, and inherited privileges.

My thoughts go back to my recent experiences in Alberta learning about the Blackfoot Nation. As well, reading about the Coastal people portrayed in the novel, “Vancouver”. It is with the descriptions in this novel that I often visualize what it must have been like to be an early settler here on the Coast. When I start to think about complaining of the non-ending rain, I only have to conjuror up one of the many scenes from the book, where the hardships of the land would have been unbearable by today’s standards.

Some related posts and pages from: The Good Stuff

One thought on “The Haida”