I have posted many times why I like live theatre. But my experience, for the most part, is professional live theatre.

On Friday, my husband attended a matinée of “A Midsummer’s Night Dream”, performed by pre-teens. We happened to be very familiar with 2 of the children actors. But, according to the daily reports, these drama students had not even started their speaking part practice until Thursday.

So it was going to be interesting.

We arrived at the appointed time to the venue – The Surrey Arts Centre. This is an amazing building which is helping to create and showcase art of various forms in the City of Surrey.

The actors were running behind for the 2pm start. So we were directed over to the concession. Just like at “real” theatre events there was a full choice of items, including alcohol. So I went for the last glass of Township 7 Chardonnay.

As my husband and I chatted, enjoyed the art in the building and guessed what the performance would be like, it felt like any other pre-theatre build up.

All the kids were wonderful. They ran around with paper scripts and needed prompting, but they were having a blast and it showed. The Director was a gracious woman who showered them with praise. My kids concluded that this was the best camp they had ever been to.

Tonight was our annual Christmas family cultural event. And this year, I out did myself. (If I do say so!) We were front row centre in a nice small theatre on Granville Island for, “The Patron Saint of Stanley Park.”

It was better than anything we could have imagined. It made us laugh out loud and brought tears to both my husband and I. (The kids couldn’t understand that bit). Afterwards, we had dinner overlooking False Creek, where we discussed the play and generally enjoyed each other and the amazing view.

I was immensely proud of the way my children watched and enjoyed the performance. Just now, my husband thanked me for making sure to get tickets. (7 month lead time to get front row centre!)

Some days, I wish for a Patron Saint to guide me along. There are so many to choose from, I may just pick one anyway. It is a nice feeling to have a little extra faith.

Well I guess that is your perspective when you have been living at the cabin for a month. I thought it was a bit much, but then driving down Granville Street, there are sights that I sure don’t see everyday. Mostly the people, much different from my suburban ‘hood.

We made a trip into the heart of Vancouver’s Stanley Park last night to watch the closing night of Bye, Bye, Birdie. It was a Theatre Under The Stars production at Malkin Bowl. This is just the latest in a string of productions that we have attended as a family. For us there is a sort of pomp and circumstance involved. We usually get to drive to another part of the city, eat out, (which the kids never seem to tire of), stay up late and let your imagination roam. The last bit is what I like the most. It is a different experience than a Hollywood movie.

We started to attend live theatre as soon as the kids were reasonably old enough. It was a Christmas production of Peter Pan and my daughter was probably 4 and my son 6. We had front row balcony seats in a Calgary Theatre very much the same shape as the Globe Theatre in London. If they could make it through at that age, I knew we could continue to develop our repertoire of viewings.

Since that early show, we have tried to attend something twice per year – a summer and Christmas presentation. (I even snuck in the ballet last Christmas!) Beyond my own enjoyment, I sneak peaks at my babies throughout and take little mental snap shots of them. It is amazing to watch their multitude of expressions. Later, I always try to find out what those stares might have meant, but the moments are always very fleeting. 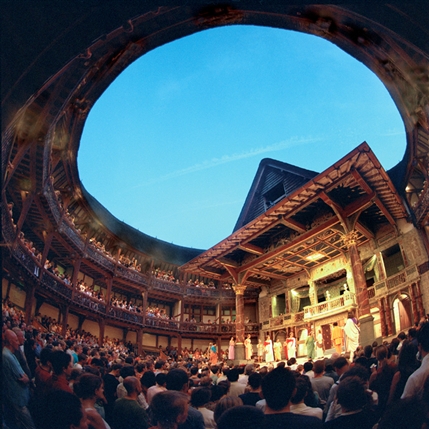 We have made reservations to see “Anne Boleyn” at Shakespeare’s Globe Theatre in London. Not Ontario – the UK! I was looking to make hotel reservations last night and ended up spending 100 pounds on tickets instead. You even have to rent a cushion if you want a comfier seat.

I have been to this theatre before, many years ago with my Mom. We didn’t hit it right to see a performance, but I fell in love with the venue.

This time around, I am so excited to be able to see something and a play that really interests me as well. My husband goes along with me on all these outings, but is never quite sure if he will like it.

Last summer, we took in “Anthony and Cleopatra” at Vanier Park in Vancouver. That is an amazing venue, with a whole Shakespeare festival built under a series of tents. I was preparing my kids for the play and my husband passed by and exclaimed, “they are going to talk like that?” But it was good, and we are planning to return to see something else this summer.